Google Chat may not be popular among general consumers, but it does have more use in enterprise settings, especially since G Suite admins picked up the ability to migrate to it from Hangouts earlier this year. It’s a small quality of live improvement, but for teams using Google Chat, you can now set your status to away directly from Gmail. 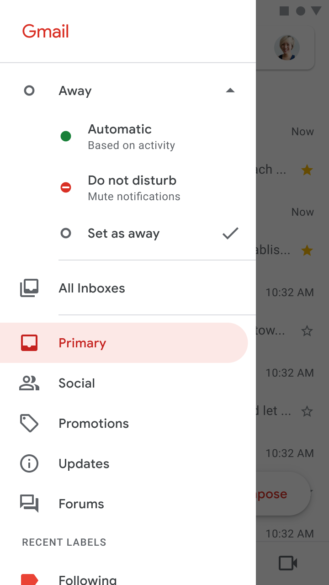 Domains still using Hangouts can indirectly get in on the action as well by disabling the “show when you were last active setting.” According to Google, the feature is rolling out as we speak to Gmail’s web client, as well as the iOS app. It isn’t live yet on Android, but it’s coming soon. Admins also don’t need to do anything to turn this on (in fact, they have no control over it at all), but end-users can now toggle to a distraction-free “away” state when and as required. The feature is available to most G Suite customers, excluding Essentials.

Earlier this year, Google started finally started tidying up the mess that is the Hangouts to Chat transition, which is expected to kick into full swing early next year.

Google is testing a likes counter for stories in Discover feeds

Google continues to tinker with how it lets users tailor the stories they see on their Discover feed: first, it was a "slider" button; then came an actual binary "slider" indicating whether someone wanted to see more or less of...

Spotify is experiencing an outage

Spotify is currently down for many around the world, with lots of people unable to stream music. The company has acknowledged on Twitter that there are some problems, and a look at Downdetector confirms that a lot of subscribers have...

The Galaxy S series has been around for over a decade, and in that time it's become one of the best-selling smartphone lines in Android history. Widely seen as the iPhone's fiercest rival, the hype surrounding each new version's release...